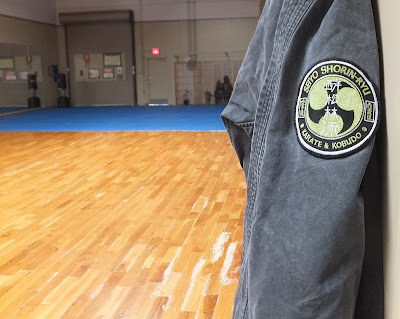 When it comes to tameshi waza (breaking techniques), I’ve seen martial artists break re-breakable boards, boards, roofing tile, sheets of ice, cinder block and rocks. The most impressive to me is rock.

Decades ago, many in the US were under the erroneous impression that karate required constant training of the edge of one hand. According to this urban legend, this training was designed to develop a callused surface that could be used to break through most anything - and this was all there was to karate! In this respect, one didn’t need a gi or even a sensei, all one needed was to beat the side of their hand on a hard concrete surface every day. Then at some point, they would walk into their local police station to register their hand(s) with local law enforcement agencies as a deadly weapon. And if ever challenged, they would have to warn the challenger that they were a karate expert and their hands were registered and considered deadly weapons. No, I’m not making any of this up - ask any senior in your dojo who is from the Baby Boomer era.

I can still remember a drama we watched on our black & white TV, where a bad guy was trying to kill a good guy with his “judo chop”. The hero of the show barely got out of the way of several strikes that destroyed chairs and tables, until the hero shot him. My mother explained to me and my brother, in order to get a karate hand, one had to constantly hit concrete for years until their hand was callused, ugly and deformed.

The next day, I started training my hand on our concrete porch in the backyard - this lasted for possibly a couple of minutes at the most until I quickly lost interest because it hurt and was boring.

Today, we know that karate has much more to offer - and no matter how long we train, there is still more to learn. And when it comes to tameshi waza, this is a very minor part of karate. It’s not breaking that’s important - it’s the confidence building that’s important, whether it comes through breaking inanimate objects and training in self-defense in the dojo.

I began training in Kokushin Kai karate as a teenager a couple of years after I tried hitting my hand on our backyard concrete porch. In Black Eagle Federation dojo we often heard stories about Mas Oyama. A powerful man who could destroy piles of boards and roofing tiles, bulls, or anyone who wanted to fight him with their bare hands.

Oyama loved to fight! In one instance, he fought 300 full-contact kumite matches in three days (no pads or gloves, just bare hands & feet). The fourth day, he was battered and bruised but showed up to continue fighting. But the contest had ended: no one else showed up. We all figured Oyama was super human who could walk through walls or quickly change into his gi a phone booth. In addition to Oyama, there were stories and legends about other amazing martial artists, such as those affiliated with Juko Kai International as well as those from Okinawa such as Chojun Miyagi, Gogen Yamaguchi, Mirio Higaonna. At the time, we didn’t know who Bruce Lee was, but he would later grab our interest after the Green Hornet show made its way on TV.

Many great Okinawan martial artists are described in a book by Soshin Nagamine entitled “Tales of Okinawa’s Great Masters”. Another book entitled “20th Century Warriors” by various authors, published in 1971, provides accounts on some other martial artists. And then you will find other examples on the internet.

When it comes to breaking objects with bare hands, some hand conditioning and finger strength is helpful, but not necessary. Tameshi waza requires proper technique under a qualified instructor: otherwise you might break something besides a board or rock. If you plan to break boards: like rocks, not all boards are equal. The greener the wood, the more difficult it is to break. Dried boards are easy to break, and plywood is impossible to break since it is layered with wood grains set at different angles to make it very tough and strong - like jade. I suspect the best board breakers in the world are employed at lumber yards, as wood isn’t cheap - the same for roofing tiles, cinder blocks and blocks of ice.


"Twirling is for marching bands & cheerleaders, not for kobudo" – Soke Hausel

A few years back, our dojo set up an information booth at the Islands in Gilbert business fair, and a Gilbert taekwondo school brought in their crack black belt demo team. Their kobudo demonstration left much to be desired - the less than deadly twirling with ultra-light-weight plastic bo pleased youngsters in the crowd, but for anyone with martial arts or fighting experience, it was clear this was useless. Then the group brought out boards and I do not exaggerate when I say I had no idea that anyone manufactured slabs of wood so thin. I wish I would have picked up a piece of a discarded board fragment just to confirm these were only about 1 mm thick! So, what is the point of breaking boards so thin? Luckily, no flying insects ran into the boards, as I suspect a well-fed flying grasshopper could have split one of those. I really don’t mean to be negative, but this was a poor martial arts demo. Even so, it had kids flocking to their dojang which may not bode well for the future of traditional martial arts.

When you decide you are ready to break your first rock, learn a little about rocks, it may save your hand. Even though rocks are cheap (unless you buy from a landscaper in the Phoenix valley), they vary in hardness, toughness and break-ability. For instance, friable sandstone is one of the easier rocks to break (but it may leave grains of sand stuck in your forehead if you decide to try atama waza - breaking with your head). Friable and cemented sandstones can be found by using geological maps for your area. For instance, examine the geological map of Wyoming and search for the Chugwater Formation. A similar red-bed sandstone occurs in Arizona, Colorado and Utah known as the Navajo Formation. If you are familiar with the John Wayne westerns; spectacular buttes of Navajo Sandstone were used as backdrops in some of his movies. As for the Chugwater Formation, it is easy to spot along the edges of mountain ranges and hills. It has a distinct reddish color that will stain your karate gi with rust (iron oxide).

If you drive on highway 287 north from Rawlins, Wyoming; immediately north of town are Chugwater Formation red beds. Or if you visit Red Canyon between South Pass and Lander, Wyoming, the base of the canyon is blanketed by Chugwater Formation sandstones. But the roadside is surrounded by gray, cross-bedded, sandstones (fossilized sand dunes) of the Nugget Sandstone that are also great for breaking. The Nugget Sandstone forms thin beds that weather to sand and to flat, elongated pieces of friable sandstone perfect for breaking.

For one demo performed by University of Wyoming Campus Shorin-Ryu Karate and Kobudo Club at half-time at a basketball game, I collected two, large, Fountain Formation sandstone blocks from an old rock quarry on the 9th street road north of Laramie once mined for building stone used on the UW Campus. For the demo, I broke one rock with my fist, and the second with my head. Breaking rocks are crowd pleasers simply because people know how hard rocks are and most people have a hard time believing anyone could break a rock with their hands, feet, let alone with their head.

Shales and mudstones are often found near or interbedded with sandstone. In western Utah, there is a thick succession of dark gray Wheller Shale in the House Range and Drum Mountains. Rock hounds scour these rocks to search for trilobite fossils. The Mowry Shale in Wyoming is also a good source for this kind of rock, and also a great place to get your vehicle stuck in bentonite in the Spring. Shale is easy to break and weathers to thin slabs. But be cautious and keep bandages handy because shale can produce sharp conchoidal fractures when broken. If you are from certain parts of Canada or Colorado, you may be also be familiar with oil shale - another type of shale. If in Florida - limestone is everywhere and is the reason why there are so many circular lakes with gators. Limestones in weakly acidic water often produces sink holes.

Everyone has heard of Tombstone, Arizona. When we think of Tombstone, most visualize Wyatt Earp, when they should instead be thinking about Naco Limestone! The reason Earp ended up in Tombstone was because of the silver-lead-gold-manganese-copper mines dug in the Naco Limestone. Limestone is massive calcium carbonate mined in many places in the west for Portland Cement. Nearly all limestone precipitated in prehistoric oceans and slowly lithified and was later uplifted on continents providing geologists with physical evidence of ancient bodies of water. Much limestone is white or gray. The reason I like limestone is that it is very hard & often weathers to large, massive slabs perfect for breaking. And while at the University of Wyoming, great breaking rocks are found most anywhere along the eastern edge of the university, particularly near the UW golf course.

Sometime when you are out visiting the Snowy Range near Centennial Wyoming - if you know where to look, you can find stromatolites. Stromatolites are a form of limestone precipitated by cyanobacteria. Stromatolites at the top of the Snowy Range were deposited 1.7 billion years ago in an ancient ocean. Because of thin layering, these often form flat slabs great for breaking. A few years ago, I put together a website on gemstones that includes some down-loadable publications. So when in Wyoming, you can find a stromatolite outcrop by using a book, “Guide to Mining Districts, etc., of the Medicine Bow Mountains…” that will lead you to this rock. Imagine a 1.7 billion year old sub-tropical ocean sitting at the top of the cold, dry, Snowy Range mountains.

In this same region, are very thick successions of quartzite. Quartzites are ‘abused’ sandstones. Just like sandstone, quartzite is formed of sand (silica) grains. The difference is quartzite started out as a sandstone, was deeply buried in the earth’s crust where the overlying thick pile of sediments applied considerable lithic pressure that caused the temperature to increase. This resulted in the sandstone to partially melt with some silica from the sand grains cemented the sandstone to produce a hard, brittle, rock. The fact that quartzites are brittle, means they can be good for breaking - but don’t forget - they are very hard.

In the Phoenix Valley in Arizona, good rocks are hard to come by because of past volcanism. The valley is filled with very hard and tough igneous rocks that include rhyolite, andesite, and basalt. Most people know what granite is - well rhyolite is nothing more than a fine-grained equivalent of granite - and we all know how hard granite. All of these igneous rocks are hard to break because they are composed of a variety of crystals that have a variety of orientations similar to plywood.

I only discussed a few common rocks used for breaking. There are hundreds of other types of rocks, so after you break a sandstone, limestone, or rhyolite, you might try others. A few years ago, I published a book about rocks that also describes some minerals and gemstones. But always look for elongated, flat rocks - your hand will thank you.
Posted by Soke Hausel at 1:52 PM

In 2014, I was contacted by nearly two dozen producers and associates searching for another hit reality TV program. They contacted me bec... 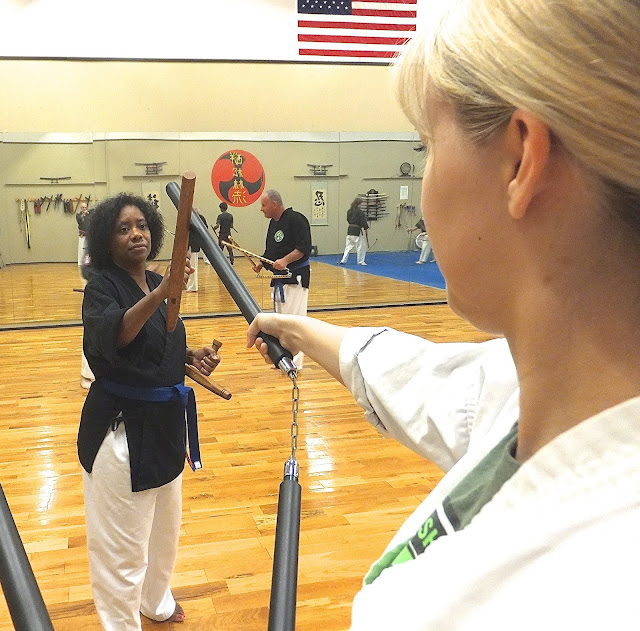